This summer marks the 60th anniversary of The Greenville Drive-In. When the theater originally opened on June 18, 1959, moviegoers gathered to view a double feature on an 85 foot screen! Things have changed a lot over the years, but current owners Dwight Grimm and Leigh Van Swall are keeping the focus on community.

The box office attendant greets you as if you’re family. And after a quick rundown of the rules (mainly “no drinking in the car”) and an explanation of the nightly raffle drawing, you’re welcome to find a spot. and settle in.

Grimm and Van Swall took over operations of the theater in 2015 after the film industry’s digital conversion forced the previous owners to shut down. But the couple wasn’t looking to purchase a theater. They were looking for a commercial kitchen where Grimm could craft botanical spirits and cocktail mixers. A friend suggested the drive-in.

When Dwight and Leigh saw the site, they were enchanted by its sweeping mountain views and vintage vibes. They saw more than just a drive-in, envisioning a community entertainment facility where local residents and tourists alike could come together and enjoy an authentic experience.

So, they decided to run it!

Once the digital projector was secured through a kickstarter campaign, they started sprucing the place up for the coming season. And with the help of local volunteers, one of whom brought his brush hog to tame the sprawling lawn, they succeeded.

The decision to show classic films was made early on. And to celebrate this season’s milestone, The Greenville Drive-In opened on May 11th with Hitchcock ‘s “North by Northwest” and on June 18th, they’ll screen one of the original opening night films!

Grimm, a filmmaker by trade, has always been a fan of outdoor screenings. But, he explained that first run movies are expensive and require a long run commitment, offering the example of the night they showed “Finding Dory”. Though they set an attendance record, they didn’t take in as much money as the night they showed “The Rocky Horror Picture Show” which attracted less than half the customers.

It’s all about the experience. And the “Projectionists’ Club” bar and beer garden is a big part of that. Added in 2016, the dog friendly outdoor hang is the perfect spot to relax, enjoy a cocktail and mingle with friends, human and canine alike. And on Saturday nights, you can groove to live music from acts like The Red Haired Strangers.

Grimm is the resident mixologist. Allowing him to share his passion for potions and connect with his customers. Which, for he and Van Swall, has been the highlight of the project.

Last season, on the night they screened “Gremlins”, Grimm met a couple who had gotten engaged at a drive-in showing the film in 1984. They were thrilled to relive the moment at The Greenville. And Grimm was honored to host their special night! 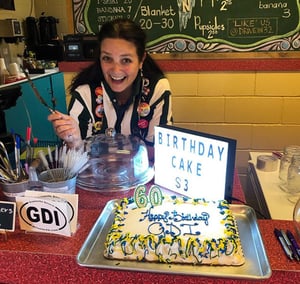 So, by combining their love of outdoor films with their love of all things local and quirky, Grimm and Van Swall hit on a winning formula. Concessions feature treats from local purveyors, like hot dogs topped with Sauerkraut Seth’s amazing Kim Chee and baked goods from See and Be Kitchen in Cairo.

Even the merch is local! Though a bulletin board features photos of the drive-in’s fans wearing its signature retro tee in locations all over the world, the shirts themselves are made by Upstate Ink in Catskill.

Grimm and Van Swall have seen growth over their four seasons of operation. The community is behind them, filling in gaps in tourist traffic when the weather is bad. And for their part, they enjoy giving back by hosting informational forums and fundraisers for local causes.

Since they’re constantly upgrading, Grimm jokes that they’ve been open “under renovation” for four seasons. But their fans don’t seem to mind. Each innovation has been embraced, from lawn games to theme nights. And though the occasional movie-goer still asks why they aren’t showing the latest blockbusters, the people who flock to The Greenville Drive-In for the overall experience, as Grimm put it, “just get it”.

Looking to start or expand your business in Greene County, NY? Get concierge service from the Invest In Greene Team by calling 518-719-3285 or emailing business@discovergreene.com.