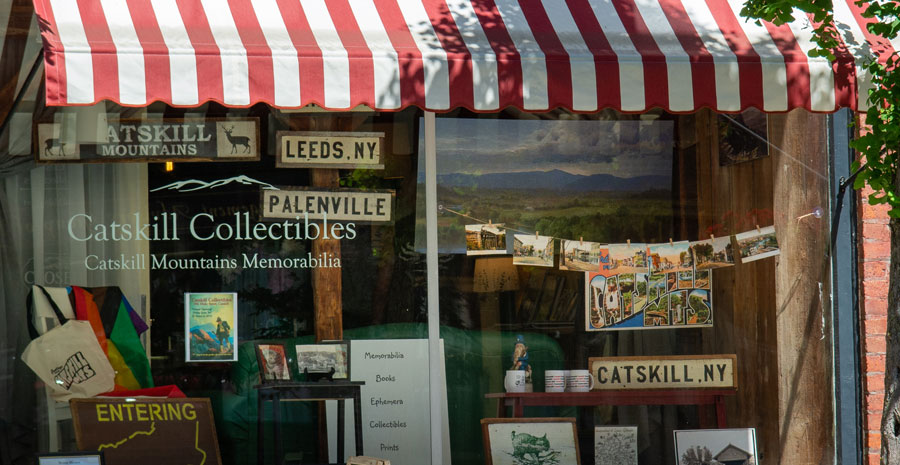 Tom Illari, like many residents of Greene County, does not originally hail from the area. Though he grew up and worked downstate, he’s always loved the County’s unique charms. As an avid collector and researcher of all things Catskill/Greene County, he’s devoted himself to sharing that love of our communities’ rich history with visitors and residents alike. At the recently opened brick-and-mortar storefront for Catskill Collectibles, located at 386 Main Street in Catskill, he’s assembled an expansive collection of fascinating historical memorabilia that’s sure to tickle any guest’s fancy. 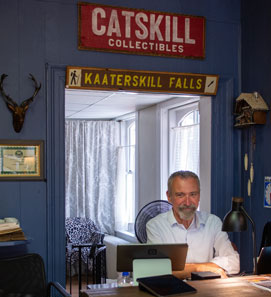 Tom got his first taste of Greene County and Catskill in 1964 as a young child thanks to his family, who made it a point to vacation there often. Whether it was exploring the beautiful hiking trails or visiting the many historical sites throughout the area, he always considered it to be his own personal Disneyworld. These routine trips up to our neck of the woods would be incredibly influential on his life, and he never missed a chance to visit. Even while attaining his B.S. in Accounting from Queens College and MBA in Finance from St. John’s University, he never let his affinity for the Catskills fade. 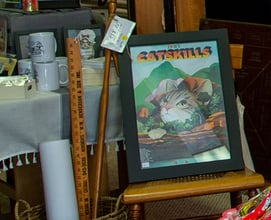 Though he spent most of his time working for many successful companies in New York City, Tom never stopped growing his own personal collection of Catskill memorabilia. While he was mainly interested in collecting photographs, postcards, memorabilia, railroad travel guides, and hotel/boarding house brochures of the region from the 1800s and on, he never passed up the chance to add something intriguing to his menagerie. Then, around 2007 while Tom was working as the CFO for Siwel Consulting Inc., a close friend suggested selling, or at least displaying, his artifacts. Since he already owned a second home in the region, he knew there was an opportunity to lease a display space at one of the local farmer’s markets. It was here that Catskill Collectibles began to take shape.

Tom ran his stand successfully for a few summers before pulling back to focus on his full-time job, while also replenishing his collection. In 2017, he had an epiphany – he wanted to devote more of his energy to his lifelong passion. Not long after, he had created his first Catskill Collectibles Etsy site and Facebook page. He quickly developed a devoted following of Catskill history aficionados from across the country. But within a few years, he would find himself faced with the perfect opportunity to expand his business and give even more people the chance to discover all the amazing history of the area. 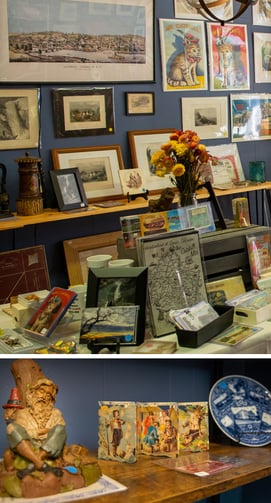 While Tom was shifting from the finance sector to supporting Catskill Collectibles, he still helped a few Main Street storeowners with their accounting. By a stroke of good luck, one of them mentioned to him that a space had just become available to lease, and that he should consider opening a brick-and-mortar storefront. Even though he had to convince himself that it was a good idea, he eventually contacted the landlord – and within a week and a half of discovering the property, he had signed the lease. Tom wasted no time repainting and restoring the business, as well as filling the store with some of his finest historical pieces. Now, they’re celebrating their third week in business and are loving the reception!

Since the grand opening, Tom has been working hard to get people excited about diving into the Catskill region’s interesting history. Though he’s always seeking the next hard-to-find collectible, he prides himself on his 1800s-era hotel memorabilia (such as Catskill Mountain House plates, teapots, and walking sticks). He’s been thrilled to be part of the re-introduced First Fridays on Main Street in Catskill, during which participating storeowners extend their hours until 8 PM to help introduce visitors to all things Greene County. He’s happy to report that he’s had intrigued guests stopping in right as he’s about to close (and is always ready to show them around)! Business is booming too, with the biggest draw in his store being all the Catskill Game Farm memorabilia. He especially loves hearing why these pieces of history mean so much to his clients – and everyone has their own story to tell.

The love and respect Tom Illari has for Greene County is apparent in every word he speaks and every object he lovingly displays at his store. It’s proof positive that everyone who comes to know our communities always finds their way back to here.