Community Placemaking for the Creative Economy in Greene County, NY

While the traditional hubs of what is known as the Creative Economy have been largely urban, the cyber-scape of American business is continually advancing, much to the benefit of rural destination-communities like those in Greene County.  So why do rural communities care about the Creative Economy in the first place? The short answer is JOBS.  As technology continues to march forward, formerly good-paying jobs that don’t require college degrees seem to disappear.  The number of people required to produce any given product or service has been greatly reduced over the decades, simply because the tasks those workers performed have been automated, computer-assisted, or mechanized. 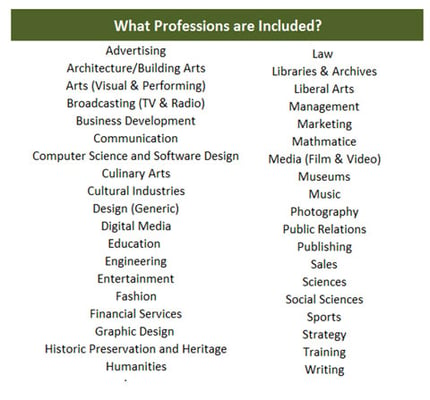 Workers in the Creative Economy, by definition, produce novel and/or unique products and services that don’t involve repetitive or uniform tasks. The work they perform requires individualized interpretation, adds significant value, and simply cannot be performed by robotics, computers, or machinery (although these jobs often rely on the latest advances in technology).  Creativity is key – the ability of an individual to unerstand a goal, think strategically, and bring his or her unique value-add to the job is what identifies these producers - and the work they perform is critical to a wide variety of professions.

Over the past 20 years, Creative Economy jobs have become less and less limited by location.  Telecommuting and working remotely have not just been accepted by successful businesses, it’s been embraced!

Businesses view a remote workforce as an asset that actually reduces overhead, and improves both productivity and morale.  ‘Creatives’ are compensated based on their performance, and therefore often better paid and more critical to the business than workers who need to be told what and how to do every task.

So, now that technology has enabled Creatives to work remotely, how do they choose a location?

That’s where Community Placemaking comes into play.  Partners from public, private, and not-for-profit sectors work together to shape the Physical and Social character of a Town or Region around creative lifestyle and cultural activities.  Projects that rejuvenate and revitalize structures and streetscapes, improve local business visibility, provide access to public services, and protect the safety of residents and visitors ultimately attract a diverse group of talented residents – to collaborate, inspire, and be inspired.

Over the past 15 years, Greene County has been awarded over 70 grants devoted to Revitalization and Economic Development, and the New York Broadband Program is supporting projects to deliver broadband access to 100% of the state.

The variety of communities in our Catskill Mountain, Rural Valley, and Historic Hudson River Towns, combined with their relative proximity to east coast major metro areas (and significantly lower cost of living) make Greene County an ideal place to live, work and play.  Creative professionals are indeed looking for that, but they are also looking for more.  Connectivity is a requirement for Creativity in the 21st Century, but even more important is Community and Culture.  Creatives thrive on exploring, experiencing, and challenging their minds.  They are passionate about their work and their community, and take an active role in pursuing and supporting the arts, access to information, and cultural events.

Community Radio – Transmission Arts and the Mission of Wave Farm

Community Placemaking is no new concept to Galen Joseph-Hunter and Tom Roe (Executive and Artistic Directors – respectively) of Wave Farm – a 29 acre experiential transmission arts compound located in Acra, Town of Cairo, NY.  Wave Farm began in March 1997, as a microcasting collective in Brooklyn, NY called free103point9 and was an active participant in the U.S. microradio movement - an activist and advocacy effort that helped create this country’s low-power FM radio service, which provides a licensing opportunity for small broadcasters operating transmitters of 100 watts or less.

By 2005, the organization had relocated to Greene County, establishing Wave Farm where they began the work of building a destination for Creatives interested in the Transmission Arts – a multiplicity of practices and media working with the idea of transmission or the physical properties of the electromagnetic spectrum (radio). On February 26, 2011, Wave Farm's WGXC went live on air at 90.7-FM and now covers substantial portions of Greene and Columbia County from broadcast centers in Acra and Hudson and remote production from the Catskill Public Library. Wave Farm's WGXC 90.7-FM is a creative community radio station, where hands-on access and participation activate WGXC as a public platform for information, experimentation, and engagement. WGXC serves more than 78,000 potential listeners on 90.7-FM and international listeners at wgxc.org. The station's program schedule features shows by approximately 100 volunteer programmers ranging in age from 9 to almost 90. Program Applications are accepted year-round at wgxc.org/volunteer and no prior experience is required.  Lynn Sloneker is Station Manager and Managing News Editor.

In June 2012, the Wave Farm Study Center opened its doors to the public, which is home to an international Artist-in-Residency Program, a library focused on transmission arts, WGXC’s Acra studio, and organizational administrative offices.

Today, this campus celebrates creativity through the melding of Transmission Arts and the natural environment of the Great Northern Catskills of Greene County. A series of six installations by notable artists enable visitors to explore and interact with the environment, the airwaves, and the inter and outernet.  The property is supported by an entrenched conduit carrying AC, Audio, and Transmission cable access points to nodes and stations in the woods and meadows, making power, broadcast feeds, and WiFi available to visitors and producers.  Wave Farm is open to the public, year-round by appointment. 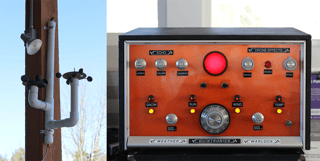 The Weather Warlock (by Quintron) is one in a series of custom-built weather-controlled analog synthesizers. Outdoor sensors detect changes in sunlight, wind, precipitation, and temperature, with output becoming particularly dynamic during periods of rapid meteorological change, such as sunrise and sunset. At Wave Farm, Weather Warlock serves as a stand-alone installation and generative composition, an online stream, as well as an interactive instrument available to visiting artists and radio programmers.   You can hear all this anytime on-line at wavefarm.org/listen 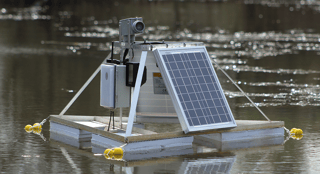 Pond Station (by Zach Poff) reveals the activity within a spring-fed pond from dawn until sundown. Hidden sounds are transmitted to local listeners on Wave Farm Radio 1620-AM and Wave Farm’s WGXC 90.7-FM, and streamed to international audiences at wavefarm.org/listen 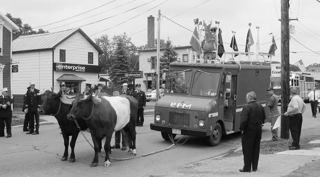 Mobile 49 (M49) is a research/production facility, which serves as a central component in Max Goldfarb’s recent work. The Deep Cycle project, was an area-responsive mobile radio program, originating in Hudson, New York, proceeding through a set of designated locations for performative incidents, and arriving at Wave Farm. Regenerator describes M49 installed at Wave Farm. The vehicle houses Wave Farm Radio 1620-AM, and is open to public visitors, both as a performance artifact and as an active studio environment.

The SURVANT USB Dead Drop (by Patrick Quinn) is an open-source file repository located off of the forested path. Inspired by Aaron Swartz’s various hacktivistic dead drop projects, SURVANT aims to function as both an archive and a remixological tool. 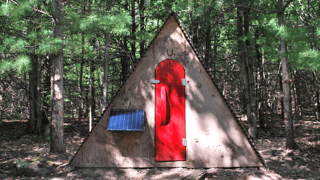 Japanther’s Remote Audio Outpost is a solar-powered recording booth, outfitted with a rotary phone wired by Cablesmith (Jason Rutherford) for both recording and transmission. Installed in one of the most remote corners of the Wave Farm property, it is a place for introspection and confession. 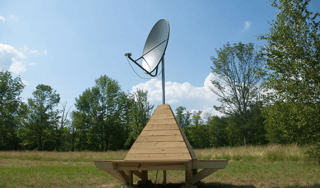 Outernet Library Branch–Wave Farm (by Heidi Nelson) features a satellite dish antenna surrounded by Adirondack-chair-inspired seating, with a bench oriented toward each cardinal direction. The WiFi network access area is defined by a large mowed meadow. In addition to seating, the structure houses a box for electronics and a single physical library reference book located under the east bench. On entering the library area and perhaps taking a seat, a library branch visitor may read, view, listen to, and save library materials using a browser on their cell phone, tablet or computer. To browse these Outernet library files transmitted from the Inmarsat satellite, connect to the "Outernet" WiFi network and then use a browser to visit outernet.is.

Wave Farm’s combination of Transmission Arts interactive installations, the two-way, hands-on aspects of Community Radio and, the incubation, support and advocacy of Creatives (from casual visitors, to passionate volunteers, to Artists in Residence) set a perfect example of Community Placemaking in action.  They continue to build this destination for people to collaborate, inspire, and be inspired, and were named Greene County Chamber of Commerce Not-for-Profit of the Year 2017.  Executive Director Galen Joseph-Hunter was also honored with the Greene County Council on the Arts Distinguished Service Award for 2017.

You can learn more about the experience opportunities at Wave Farm, WGXC Community Radio, and the support and advocacy work they do at https://wavefarm.org/.

You can also learn more about the Business Support Programs available to enhance the Creative Economy in Greene County, NY by visiting www.InvestInGreene.com.