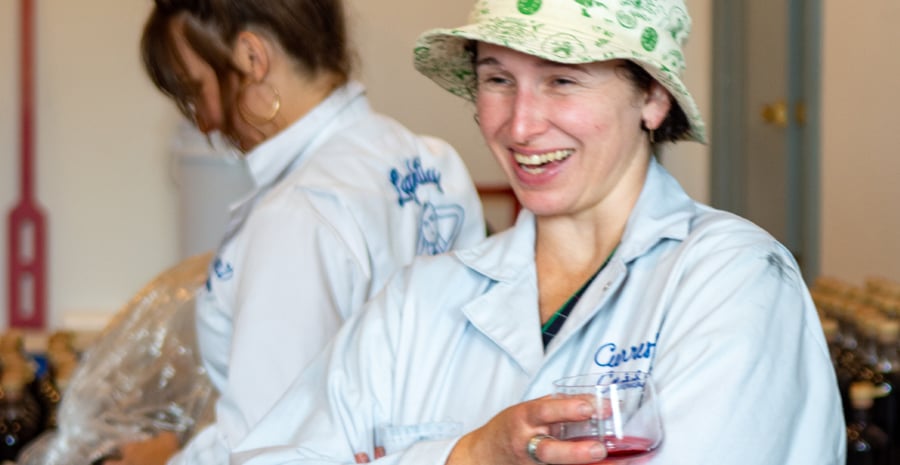 Rachael Petach has always had an appreciation for the intersection between living life and enjoying food and drink. She is particularly interested in how people can bond over a bottle of wine or spirits and form lifelong memories because of it. It’s these twin passions that drive her latest enterprise, Current Cassis at 150 Water Street in Catskill. In her cozy production facility located over Left Bank Ciders, she’s whipping up a seriously sippable blackcurrant liqueur that’s best shared with friends and family alike.

Rachael has had a connection to the food and beverage industry for many years, thanks to her parents’ shared love of cooking and hosting. By the time she was 15, she already had her first job as a hostess in Southern California. She then spent her youth working in restaurants throughout the Bay Area. Shortly after, she moved to Madrid and spent a few years splitting time between teaching English and running a small pop-up restaurant out of her apartment. It was this time spent abroad that helped Rachael develop her culinary style – but she was now ready to return to the States.

Rachael moved to Brooklyn when she returned and began to work on a freelance and full-time basis (at both the Bowery and Weiss Hotels) in event-making. While living and working in the city, she began to experiment with cordials. Their lower ABV and balanced nature made them comparable to opening a bottle of wine between friends – something light and enjoyable to bond over. This was also the time she became obsessed with blackcurrants as an ingredient, not only for their taste and health benefits, but also their history in this state. From a period spanning the early 20th Century up until 2003, blackcurrants were illegal to grow in New York, as they were considered a potential threat to white pine. Thankfully, the ban was overturned and Greg Quinn, the same botanist that helped overturn the ban, now provides much of the fruit used in Current Cassis’s blackcurrant liqueur.

Though she started by producing the liqueur in her Brooklyn kitchen, Rachael is now comfortably creating her 16% ABV treat within Greene County. Made with lightly fermented NY blackcurrants, whole green cardamom, bay leaf, citrus rind, lemon verbena, wild honey, and clean distilled spirits, it’s a light, smooth drink that is versatile and meant to be enjoyed by anybody. It also differs from crème de cassis, as it’s less sweet and syrupy, and the added botanicals give it extra depth and flavor in many different cocktails.

Rachael intends for the liqueur to act as a link between supporting local agricultural efforts and the joy of indulging in a unique sensory experience – and when she says local, she means local. Aside from the blackcurrants sourced from Greg Quinn, she also sources her honey locally and receives her grain-neutral spirit from Hudson Valley Distillers. She understands the importance of establishing a connection to the region and is eager to give back by introducing the community to a new product that’s locally made, unique, and delicious.

Now that production is steady and the good word is out, Rachael has big plans for the future of Current Cassis. Though the liqueur is well-represented in stores throughout NY, NJ, and CA (with national shipping options available), she is looking to build a national brand. Within the next year or two, she plans to find a larger space and expand her production capabilities. She’s also eager to form new partnerships and collaborations with other local distilleries and businesses.

The sky’s the limit for Rachael, but her blackcurrant liqueur down here on Earth is excellent. It’s just one example of how Greene County abounds with creativity. This passion and willingness to think outside the box help us all learn and grow together as a community.