Lloyd Zimmermann began his fascination with agriculture as a boy visiting his summer home in Medway, NY in 1940.  This son of a Political Science professor at Hunter College and a Latin teacher from Queens met his wife, Mary Lou, when both were students at the University of Vermont. By 1965, the couple had purchased a Greene County home in the town of Coxsackie where they raised their three daughters.

They named their farm Black Horse Farms after the remains of the inn formerly located next to their historic 1864 barn on what is now US 9W in the town of Athens. 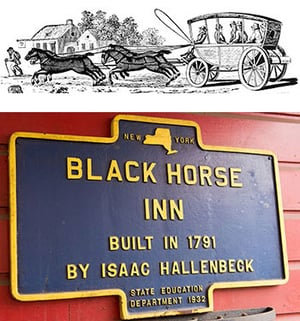 en travel from New York to Albany was made on horseback or by stagecoach, the Old King’s Road passed a series of inns and taverns where visitors could find respite, food & drink, and a bed for the night.

The Black Horse Inn (established in 1791) offered superior accommodations, and the great men and politicians who made their way to and from the state capital made it their stopping place.  Among the great figures who ate at it's tables, warmed by it's fires, and slept in it's beds were Dewitt Clinton (champion of the Erie Canal).  There is even a legend that George Washington spent the night as president on his way to attend a christening for the aristocratic Van Rensselaer family in Albany.

While still in grade school, the Zimmermann daughters (and a cousin) went into business by setting up a table in front of the barn and selling their fresh, local produce to friends, neighbors, and passers-by. Noting the success of the operation, Mary Lou and Lloyd decided to expand in 1969 by opening the doors to the barn and selling flowers and vegetable plants grown in an adjacent greenhouse.

Mary Lou notes: “Many expansions have occurred during the years [since we opened].  Over 40 greenhouses have been built and automated to handle the increased demand for flowers and vegetable plants.  The produce side of the business boomed and we began to send our produce to the major chain stores in the area, including: Hannaford, Price Chopper, ShopRite and Whole Foods.  So, we purchased another 80-acre farm on our north side of the home farm, added packing barns and coolers for our crops, and began to rent many farms in the area.  At Black Horse we enlarged and updated the store, adding a bakery and two more beautiful greenhouses.”

Upon graduating from college, two of the Zimmermann daughters brought their expertise back to the family business.

The fiftieth anniversary of Black Horse Farms was celebrated by a ceremonial Grand Re-Opening by the Greene County Chamber of Commerce in June, attended by a large number of customers, well-wishers, and friends.  The business has grown into a destination for travelers to and through the region, as well as a staple for local customers.

Black Horse Farms is a shining example of sustainable and profitable agribusiness in Greene County, NY. If you’re interested in finding out more about starting your own legacy business in one of our 14 Catskill Mountain, Rural Valley or Historic Hudson River towns, Click Here or contact the Invest In Greene team at 518-719-3290 during normal business hours, or at info@investingreene.com any time.

Click here to download our FREE eBooks on business opportunities in Greene County, NY and “Do What You Do in a Place You’ll Love.