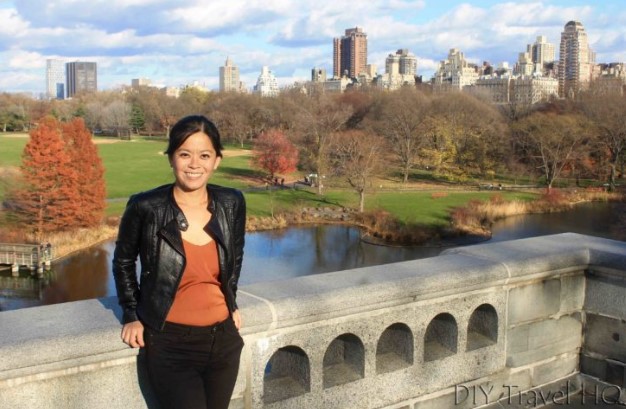 Sheena & Erik (aka DIY Travel HQ) describe themselves as "Partners in Crime & Independent World Travelers" from Adelaide, Australia and New Jersey, USA.  Having visited over 80 countries on 6 continents, they are currently based in NYC and excited to bring their loyal following lots of tips and recommendations from the Big Apple!

Their recent trip upstate produced a variety of blog posts, including the excerpted below that is near & dear to our program….

Their “5 Best Restaurants in The Catskills: Where to Eat & Drink” sites ALL 5 right here in Greene County, NY! 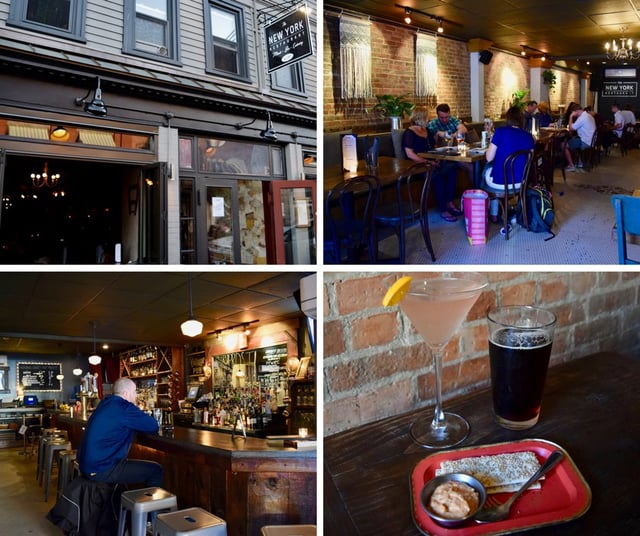 To us here at DIY Travel HQ dining at the trendy The New York Restaurant feels like being in Manhattan but it’s actually 2.5 hours away in Catskill town.

The restaurant dates back to 1922, revived by the new Polish-American proprietor.

The exposed brick, dark furniture & low lighting exude those New York vibes that brought us to the City. And the chandelier is added an extra touch of class & elegance. Other features included plants, textile wall hangings & vintage tile floors.

The large open window at the front of The New York Restaurant lets in a lot of natural sunlight– if you are in a group of 6, the booth-style seating here is the place to be.

Though the décor & menu may appear upscale, we loved the relaxed atmosphere at The New York Restaurant. Servers don’t wear uniforms & our meal wasn’t rushed.

We usually love to share food but it’s not often that we come across Polish restaurants and the Tour of Poland ($19.50) had a little bit of everything we both wanted to try.

The Tour of Poland was a big plate filled with:

While The New York Restaurant reflects the Polish-American roots of the owner, it offers a contemporary menu with Asian & European influences too.

There are many appetizers, burgers, flatbreads, soups & salads to choose from. That’s before getting to the entrees which included dishes such as Cast Iron Rib-Eye, Coconut Curry Vegetable Rice Bowl & Seared Dill Salmon.

Besides vegetarians, sweet tooths are also catered to with plenty of desserts & after diner drinks available.

With its high quality food & service, The New York Restaurant brings Big Apple style to the Northern Catskills – it takes out the #1 spot on our list of 5 best restaurants in the Catskills!

We had just been under the sun for a couple of hours at nearby Hunter Mountain so we decided to stay cool under the fans indoors. But the outside deck was pretty tempting, as there were sun umbrellas too.

Back inside, the décor of Hunter Mountain Brewery is rustic-chic. It’s been open for less than a year so there is a very fresh & crisp vibe.

At first I wanted to order the Lobster Mac (17.00) but it wasn’t available. I didn’t feel the imitation crab was a good substitute.

I went with the C.B Mac ($13.00) instead, their signature mac & cheese with grilled chicken & chopped bacon topped with melted cheese. It was very tasty & cheesy!

Erik had the Fire Tower Burger ($12.00 + $2.00 extra for fries) that had Cajun seasoning, sautéed onions & jalapenos topped with Gruyere cheese & hell gate sauce. He said it was one of the best burgers he’d ever tasted & I loved the fries – though I feel they should be included in the meal & not as an extra. 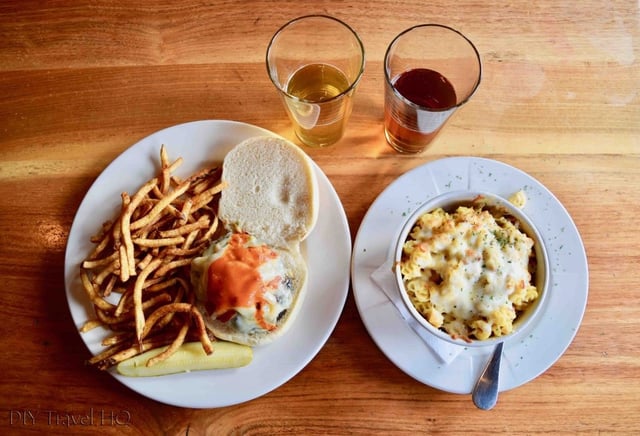 From IPA’s to stouts, there’s a large selection of craft beer on tap at Hunter Mountain Brewery. Their cocktails are inventive too, with Bloody Mary &bacon and Champagne & cream being the specials of the day.

We couldn’t see any of their own beers on the drinks list so we checked with the server. She informed us that they are just coming to the end of the long licensing process with the State.

All the brewing equipment is ready to go – you can see it behind a window at the back of the restaurant.

We loved the food & relaxed atmosphere so we’re keen to come back to try their beers & dinner menu, which is different from lunch.

Gracie’s Luncheonette has an interesting background story – it actually started as a food-truck in 2014.

After 2 popular seasons, it expanded into a brick & mortar restaurant in the town of Leeds and gained a lot more square footage in the process.

The dining area is large & you can also pull up a stool at the bar. The interior design of the restaurant is very fresh & with an air of casual sophistication.

At Gracie’s Luncheonette, everything from the meat to the dairy produce is sourced locally as much as possible.

Cakes & pastries are on display at the front counter, which are made fresh in-house daily. We heard rave reviews about the desserts from other guests at our accommodation, The DeWitt Oak Hill.

Gracie’s Luncheonette serves all day breakfast, soups, salads, sandwiches, burgers, hot dogs & mains – the variety definitely makes it one of the best restaurants in the Catskills.

Their most popular dishes are still the all-American classics that were signature items at the food truck: diner-style burgers, loaded fries & fresh donuts.

Erik ordered the lunch special of a Half Sandwich & Cup of Soup for $9.00. He had the Turkey Club sandwich on homemade bread with bacon that was smoked & cured in-house.

I had the Chicken Biscuit ($7.00) that was delicious, especially the honey butter & home made hot sauce on the fluffy biscuit. 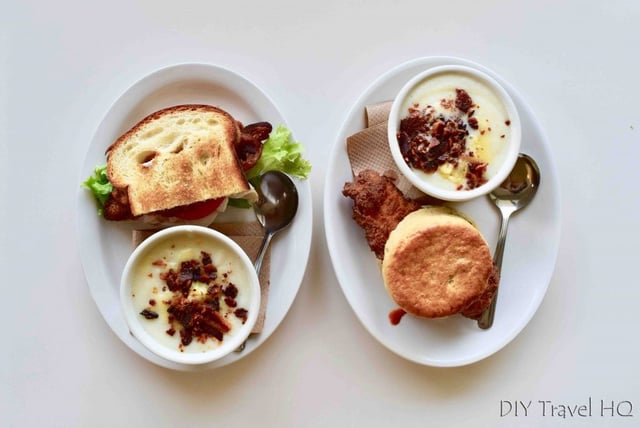 Portion sizes are a little on the small side compared to other restaurants in the Catskills but it’s one of the trendier dining spots & the food quality is high. If we had more time, we would’ve definitely had dessert!

Gracie’s Luncheonette also makes all their own soda from scratch. We tried the Root Beer ($3.00) that was really good – you could taste the cinnamon & nutmeg, mmm! We should’ve finished it off homemade ice-cream & rum to make a boozy float

Be sure to put Gracie’s Luncheonette on your weekend Catskills itinerary from NYC! 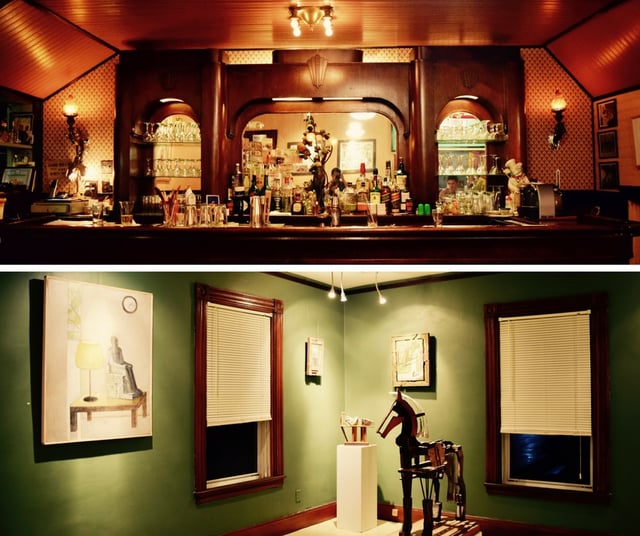 Ruby’s Hotel is a bar & bistro located in a restored 19th century building in the small town of Freehold.

From the retro bar stools to the lighting, we loved the vintage décor of the restaurant. The large wooden Art Deco bar caught our eyes immediately – especially with all the spirit on the shelves.

There was a large counter on the other side of the room that looked like a soda fountain bar but it wasn’t in use.

Upstairs is the BFA Gallery exhibiting regional & metropolitan artists. At first I wasn’t too impressed but Erik told me to go back & take a closer look. Holy moly what clever use of mirrors to create optical illusions!

There are also ceramic tiles on display by the owner-bartender Frank. He has large mosaic murals at Whitehall Street and 2nd Ave/63rd St subway stations in New York City so we’ll definitely be checking those out.

The ever-changing menu is written on a white board that is taken around the tables when you are ready to order. There are only a couple of choices each for soups, appetizers, salads & desserts but several more options for entrees.

Ruby’s Hotel is only open Friday to Sunday evenings in the summer, and Friday & Saturday evening in the winter. Arrive early as dishes sell-out, as we found out when we came in for dinner around 8:15 pm.

I ordered the Heather Ridge Panko Breaded Organic Chicken Breast over Veggie Orzo ($18.00). I was pleasantly surprised to find goat’s cheese in the chicken though the orzo could have had more salt or flavor.

Erik had Pork Chops in Sage with Prosciutto, Hushpuppies & Veggies ($18.00). The pork chop was huge & it was well cooked & seasoned. This was the 1st time Erik had tried hushpuppies but I ‘d tasted them before in New Orleans as they’re a Southern dish, deep-fried balls made of cornmeal batter. 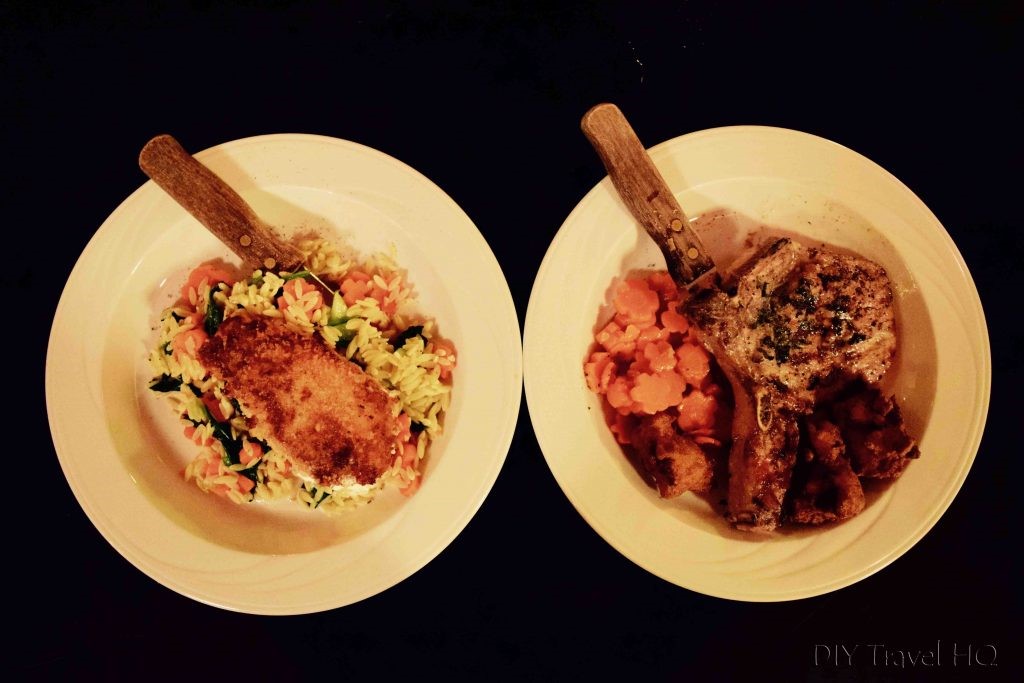 Both our dishes were hearty, generous portions.

For dessert we tried the Chocolate Pot de Crème & Frozen Lime Mousse Parfait (both $7.00) – a yummy sweet note to end on.

Ruby’s Hotel delivered the comfort food, lively local atmosphere & friendly hospitality that we were looking for – that’s why it’s one of the 5 best restaurants in the Catskills! 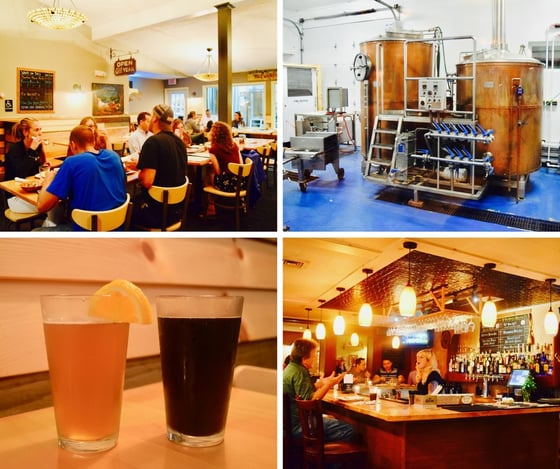 Angela’s Italian Bistro & Brewery is a large restaurant with 2 seating areas & a bar in the middle.

With something for everyone & a casual atmosphere, Angela’s Italian Bistro is a great place for all, especially families & groups.

We shared an appetizer of hot Jumbo Chicken Wings ($10.00) with blue cheese sauce – they were finger licking good!

I had the Steamed Clams ($10.00) with garlic, bacon, tomato & a splash of their own Mountain House Light. The seafood taste in the broth was a little too intense for me but Erik like it.

Erik ordered the American Classic Burger ($9.00) with a charbroiled patty. He liked it & was impressed that the server asked him how he wanted his meat cooked! The chips on the side were yum! 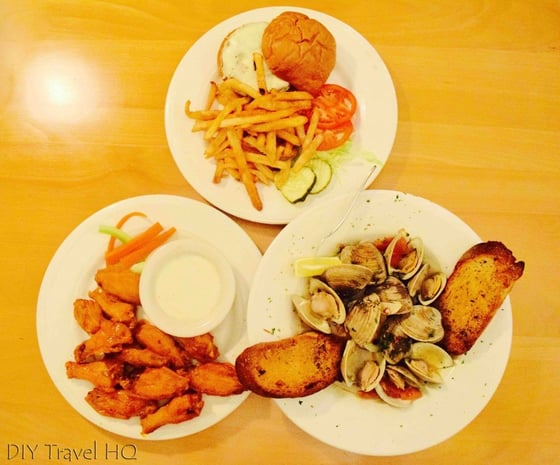 Angela’s Italian Bistro is also home to the Rip Van Winkle Brewing Company & some of the best craft beer in the Northern Catskills.

If you’ll be traveling more around the East Coast, check out the Ale Trail in Asheville, North Carolina.

We tried The Shucker Punch Oyster Stout ($5.00) that had freshly shucked Blue Point oysters added directly to the kettle. Fortunately there was nothing floating in our pints! Actually we couldn’t really taste the oyster-flavor but the roasted malts made a great brew.

We also taste the Rip Van Wit ($5.00), an unfiltered Belgian beer with plenty of wheat. We couldn’t taste the coriander & orange peel but it was a solid beer.

Although Angela’s Italian Bistro & Brewery is last on our list of the 5 best restaurants in the Catskills we really had a great experience here. The standard is just pretty high so your appetite will definitely be satisfied wherever you choose to eat in Greene County!

Interested in Starting an Eatery or Craft Beverage Destination in the Great Northern Catskill Mountains?

Greene County is the Place!  Find Out More about how our New Business Assistance Programs help you Do What You Do in a Place You’ll Love.