Michael Koegel has paved a diverse path through life, having worked as both a network television producer and a restauranteur. The networking and organizational skills he developed in the entertainment industry prepared him for transitioning to the restaurant industry. But nothing prepared him more for his career shift than moving from the hustle and bustle of New York City to the relaxed nature of Greene County. Now he’s a vital part of the community, serving delicious meals out of Mama’s Boy Burgers at 6067 Main Street in Tannersville. 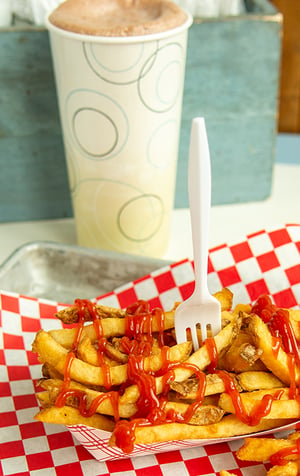 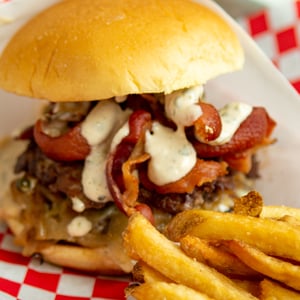 Michael always had a drive to be involved in theatre. While he always tried to develop his talent in writing, he also had an interest in eventually directing a production of his own. This pushed him to earn his MA in Theatre from SUNY Brockport in 1982, and then his MFA in Theatre from the University of Pittsburgh in 1986. After developing his skillset for a couple of years, he was able to move to NYC and eventually landed his first job as the Executive in Charge of Talent for Nickelodeon. From there, Michael spent over 10 years working in the television production and entertainment industry, carefully honing his development and planning skills.

Michael then set about working to improve his writing skills as a freelancer. In this time, he was able to produce some excellent content, while also spending time teaching college courses and directing theatre productions within NYC. It was in this transitionary period that Michael realized that while much of this was fulfilling, there was still more he wanted to accomplish. When 2010 rolled around, Michael had already made the decision to move to the Upstate New York to try his luck as a coffee shop proprietor.

Michael’s initial venture was Mama’s Boy Market and Café, a cozy coffee shop that he felt was positioned to succeed in the small town of Phoenicia. His unique blend of skills in business management, development, and networking helped him turn the small café into a successful business in the area. After five years of nurturing the business and aiding in the development of the close-knit community, Michael decided to try something different yet again. His next venture? A handmade, locally sourced burger shop in another town in Greene County that was practically demanding one. 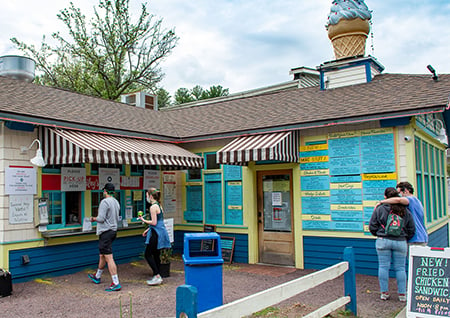 Michael noticed that the Smiley’s building, a long-standing Tannersville ice cream store, was available for sale. He quickly figured that the location was perfect for a combination burger and ice cream shop, as the area didn’t have any comparable alternatives for that classic local quick-bite-to-eat stop. With an airtight business plan and a devotion to serving the community, Michael quickly connected with Greene County and the Hunter Foundation to secure the financing and assistance necessary to get Mama’s Boy Burgers up and running. What was once another formerly “risky” business venture is now a mainstay in the Tannersville and Greene County community – and the burgers certainly live up to the hype!

Mama’s Boy Burgers stands out as a delightful reminder of the burger and shake shops that make 1950s Americana so recognizable. From the vibrant checkerboard tablecloths outdoors to the classic retro TV inspired menu cards at every table, the atmosphere is positively infectious. In addition to the fantastic motif, Michael has also made a commitment to sourcing local ingredients for his menu as often as possible. Every delectable burger is made from grass-fed Black Angus beef sourced from JJF Farm LLC, only 6 miles up the road from the shop. And while Smiley’s is gone, Mama’s Boy Burgers still insists on serving many flavors of the locally produced Jane’s Ice Cream.

Michael Koegel is a sterling example of the type of community members that help make Greene County great. His love and respect for the community is noticeable in everything he does – from his lovingly made food to his willingness to support other local business owners (he’s also a permanent occupant at the recently opened WorkSpace Tannersville). It’s yet another piece of proof that Greene County attracts and supports some of the best people in the world.