If you asked your friends “What kind of businesses do you think best suited for success today?”, you’d probably expect to hear responses like: “High Tech”, “Renewable Energy” and “Something to do with the Connected Economy”.  While start-ups in these sectors have definitely received a lot of coverage in the media, more and more entrepreneurs are pursuing passions in business areas that appear (at least on the surface) much less ‘modern’.

A closer look reveals some fundamental commonalities when entrepreneurs choose to locate in rural (as opposed to urban) areas, and these are especially true for three Lexington, NY businesses.

First, let’s take a look at the location.  The town of Lexington is in the southwest part of Greene County, covering about 80 square miles inside the Catskill Park of the Great Northern Catskill Mountains.  Historically, the town population reached its peak in the 1840s at just over 2,800 people.  This 19th century community was basically agrarian: farming, trapping, hunting, and logging.  The town’s population had fallen by over 50% by the end of the Civil War as people moved off the family farm to pursue careers in bigger towns and cities.  Today, the population density of Lexington is just over 10 people per square mile (down from 35 in 1840).  State Route 23A connects Lexington to Prattsville to the west, and Hunter & Catskill to the east. Route 42 runs south through the hamlet of West Kill into Ulster County where it joins Route 28.  This is as rural as the Catskill Mountains get – and therein lies its appeal.

Now, let’s take a look at three new business enterprises that have opened their doors in Lexington in the past few years:

Lexington’s rural setting is a central component of all three businesses, but for two different reasons.

Self-described ‘Brooklyn girl who turns out to have a soft spot for the country’ Casey Scieszka had a writing and design career that took her all around the world.  In 2013, she and her husband Steve Weinberg bought the property that housed the former Schwarznegger’s Sunshine Valley House – a classic Catskill Mountain getaway for families fleeing the summer heat of NYC after WWII.

Over the past 4 years, they have revitalized the place into a destination for creatives and outdoor adventure seekers.  Spruceton Inn boasts ‘Nine Rooms. One Bar. So Many Stars.’  A recent article in Yahoo Finance “Young money is fleeing the wild Hamptons for its quiet rival” revealed that millennials in NYC increased their trips to the Hudson Valley and the Catskills by nearly 55% in the summer of 2016 compared to the same time in 2012.  During this period, the same group decreased excursions to the Hamptons on Long Island by nearly 46%.

This fact illustrates the desire of younger urbanites to spend some quiet time in a scenic, mountain setting – something that Spruceton Inn serves up perfectly.  Their messaging is simple: ‘Hang. Drink. Play. Relax’, and it resonates with visitors seeking a break from frenetic jobs and busy streets.  Comfortably rustic rooms, awesome views, the meadow, the creek, fire pits and BBQs combine to help visitors slow down, take things at their own pace, and enjoy.

While ‘reconnecting with nature’ is the key reason a rural location works for Spruceton Inn, two other Lexington businesses are directly tied to what the land produces.

The Syrup Chick (aka Alice Cross) has a 21st century take on a process that has been going on in Lexington for over 200 years.  For the earliest settlers, maple syrup provided a sweetener that could be stored for months, and could be made entirely from the trees that surrounded them. Making maple syrup (and maple sugar) was pretty simple, albeit labor intensive. Essentially all you needed were buckets, trees, a fire, and a cauldron to cook down the sap you collected in the buckets. 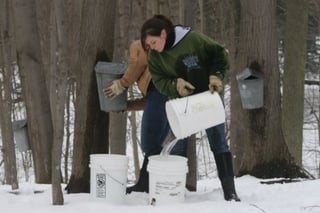 That’s where the labor intensity came in.  Maple trees produce about 20 gallons of sap per season (about 4 weeks during February and March).  It takes 10 gallons of sap to make one quart of syrup. To collect the sap, people used to cut a v-shaped groove through the bark of a tree, and hang a bucket under the groove.  Imagine trudging through snowy woods to empty these buckets and bring the sap back to a ‘sugar house’ where it could be cooked down.  Let’s say you wanted to make 10 gallons of maple syrup (enough for your family and some to sell).  That means you’d need 400 gallons of sap – that’s 20 trees. That’s a lot of daily bucket carrying over a month during the winter, let alone the time it takes to cook.

Modern maple syrup operations have benefited significantly from technology in just the past 15 years.  Buckets have been replaced with specialized plastic taps and light-weight flexible tubing (basically the same stuff we use to run water in newer homes & RVs).  Each tree is hooked into a main line that runs back to the sugar house. The sap is pumped through the line and directly into a cooking and processing unit that delivers syrup ‘ready for bottling’ through a tap at the end of the processor.

This modernization is exactly the type of investment that can qualify for support from the Greene County Department of Economic Development through its Microenterprise Assistance Program and Quantum Fund Financing provided to small businesses across the 14 towns that comprise the county. 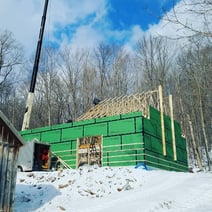 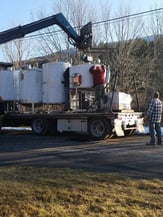 West Kill Brewing  is a great new incentive for beer-lovers to venture into the town of Lexington.  Mike & Colleen Barcone are transforming part of a 127-acre family farm into a state-of-the-art brewhouse and tasting room. 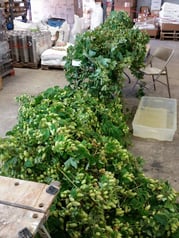 With a focus on locally grown and foraged ingredients and a soft spot for history, West Kill Brewing aims to reflect the great place it was born. Maple sap in saisons from the trees in their literal backyard, spruce tips in IPAs just like the early settlers used to do, yeast strains fermenting in their barn for their sour ales. They have fun brewing beers that are as fascinating in origin as they are delicious.

The head brewer Mike Barcone, has roots in the Catskill Mountains that go back to the first Dutch settlements. His wife Colleen is from Wisconsin but knew this place is something special on her first trip here.

West Kill Brewing supplies beers and ales to over 13 eating and drinking establishments throughout the Catskills and the Hudson Valley. When their tasting room opens in the Spring of 2017, they will become a featured destination on the Catskills Beverage Trail – an association of craft beverage producers across Greene County, NY – adding Lexington to stops in Windham, Hensonville, Hunter, Tannersville, Catskill, Athens and Earlton.

The burgeoning craft-beverage industry in New York State, fueled by enthusiasts across the country, make Greene County an ideal place to start a Microbrewery or Micro Distillery. The promotion of the Catskills Beverage Trail, as well as the year-round destinations across the area combine with increasing demand for locally produced products with locally grown ingredients. 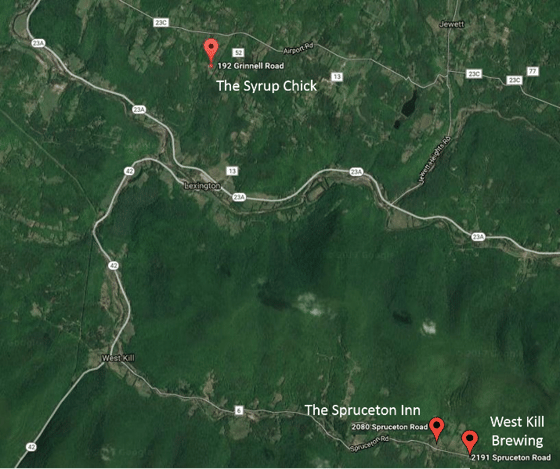 The entrepreneurs at Spruceton Inn, The Syrup Chick and West Kill Brewing are bonded by a common locale.  The resources and setting of Catskill Mountain town of Lexington is integral to each of their business models, and they share a common passion for the work/life balance that comes from doing what you do, in a place you love.

For more information on starting or relocating your business in Greene County, NY, contact the New Business Support team at 518-719-3290 or visit InvestInGreene.com