After years spent working in the banking and insurance industries Alessandro Voglino and Brent Zimmerman decided to do their part to save farms, one at a time, long before the 'farm to table' movement took place.

They bought their first farm in Caprese Michelangelo, Tuscany in 1991. They completely restored the Italian buildings that dated to the 1600's and had been abandoned for over 20 years. They then opened Priello B&B and restarted farming operations: raising sheep, goats, cows and pigs. 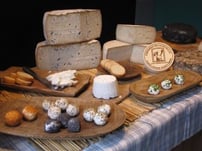 The pair then acquired a second property in Anghiari, Tuscany, and brought it back to life, focusing on raising goats and producing artisanal goat cheese. They formed a cheese production and distribution company named ABCheese.

Brent’s 2011 book 'Get Your Goat', published in the USA by Quarry books, gave him a significant reputation among worldwide goat raising experts 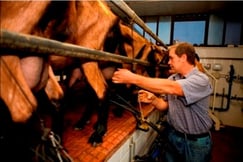 Now Alessandro and Brent have brought their long accumulated experience back across the Atlantic, starting a new farming and cheesing venture in Greene County. “The Hudson Valley is the ideal location for such an initiative, not only because of its climate and topography, but also because of its proximity to large cities (Albany, New York City, Boston, Philadelphia) where the farm to table movement is now well established,” says Brent.

Lime Kiln Farm was placed on the National Register of Historic

Places by the U.S. Department of the Interior in 1986, citing the 200+ year old farm complex as “Architecturally and historically significant in illustrating the settlement patterns, cultural traditions and construction practices of upland farm families in Greene County between 1790 and 1910”. 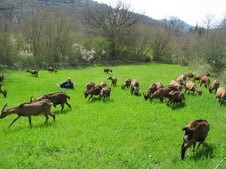 Alessandro and Brent conducted extensive internet research on Hudson Valley locations prior to purchasing Lime Kiln Farm on June 27th, 2014.  They chose the Greene County location based on the affordability of the 414-acre property, which provided 10 times the amount of pasture as that of similarly priced farms in Columbia, Dutchess, and Ulster counties.

Livestock on the farm includes: a milking herd of Oberhasli and Toggenburg goats; eleven Milking Short Horn cows, and; Berkshire pigs and South African White Douper sheep. Lime Kiln farm protects its livestock with Pastori Maremmani Abruzzesi, called Maremma Sheepdog in the United States. This ancient breed dates back to the time of the Roman Empire and has been utilized by goat & sheep farmers for thousands of years.

After nearly 2 years of renovation and facility construction, the farm produces milk, meat, and artisan cheeses on the premises - ramping up to meet the growing demand for their products.

Lime Kiln Farm is located at 523 Lime Kiln Road, West Coxsackie, NY and is planning a Fall Festival event to introduce their products to customers.  For more information, call (518) 350-9494 or send eMail to info@limekilnfarm.com

To learn more about starting a business in Greene County, NY, visit the Invest In Greene website or contact the Greene County Economic Development Team at (518) 719-3285.