The Nuts & Bolts of Starting a Business in East Durham, NY 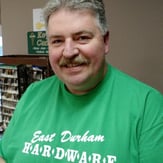 John Quirk and his wife Suzanne are no strangers to running a business.  Life-long Greene County residents, they have, over the years operated Lawyer’s General Store and The Shamrock House among others.  After purchasing the commercial property located at 2373 Rout 145 in East Durham, NY, they set to work to restore and rebrand the plaza that once contained the iconic Greene County eatery, Hans & Gretel’s.  Throughout the restoration process, John came to the realization that he had to drive at least 10 miles to pick up ordinary supplies like paint brushes, rollers, pipe connectors, and fasteners.  East Durham had no local hardware store. 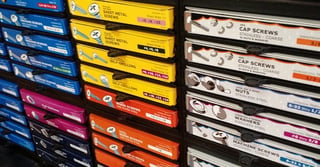 John experienced the need, first-hand, and saw it as an opportunity.  He had the perfect location, right next to Angel’s East Café (restored to the original layout and décor of Hans and Gretel’s from the 1950s).

So they had the building, and had rehab-ed the store, but this was a true start-up.  They needed everything.

“The first challenge was inventory”, recalls John. “I reached out to several suppliers I knew from the time I operated Lawyers General Store, but had better luck when I was able to purchase the inventory and display fixtures from a Hardware Store that was going out of business in Hamden, MA.”

Next came establishing good supplier relationships. The owner of the Hamden company introduced John and Suzanne to his wholesaler PACOA, and a sales rep visited them the same day.  Soon they were off to a trade show at Hofstra University, where they were able to leverage their account with PACOA to fill out the products needed to officially open East Durham Hardware.

“We’re pretty well stocked now”, John continues, “but we’re still waiting on some orders we placed back on March 5th.  Fortunately, the new ordering and stocking technologies from our wholesaler are a big help in identifying what we’re low on, and making sure we have everything our customers’ need when they come in.” 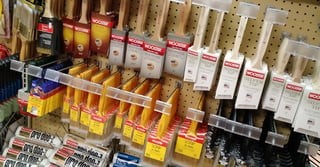 John and Suzanne love their town, and customers and well-wishers have been stopping by since the business opened in March.  Their Official Grand Opening is Saturday April 30th, 2016, just a few short months after they decided, over the winter, to bring a Local Hardware Store to East Durham.  They are open Monday through Friday between 8am & 5pm, Saturday from 9am to 4pm, and Sundays from 9am to 1pm.  You can call the store  at 518-634-2405.

The Quirks are also grateful to their community, and the support they have received from Greene County and Town of Durham.  In previous businesses, they have utilized both Quantum Fund Financing and the Main Street Revitalization programs, and promote East Durham Hardware on BuyInGreene.com.